I’m crap at reading body language but even to me my EL’s every action spoke of resentment at finding himself in Antarctica and holding one of the most privileged positions that continent can offer anyone.
His attempts at jokes never landed and he blamed the audience every time.
His every attempt to make an ethical argument led to a logical fallacy or revealed a personal philosophy bordering on nihilism (which is exhausting, I hear).
He sent me home instead of backing me standing up to a guest who tried to kick downhill at me, perhaps not recognising the problem because he doesn’t mind kicking downhill himself.
Christian Geissler: you are the Dante Hicks of Antarctica. 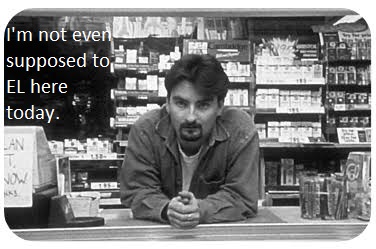 I was coming to the close of my second month aboard the Ocean Adventurer when a small cohort of guests, at the instigation of a couple of particularly onerous people, failed to get on board with the SOPs and IAATO protocols and the EL failed to lead sufficiently well to regain the ground we lost. Everyone complained about how troublesome voyage 5’s guests were but it was left to conscientious guides to work rearguard against their truculence and belligerently willful ignorance of what was expected of them. We experienced two MOBs on flat calm days because they wouldn’t heed intructions. On the final day of their voyage one of the onerous guests, a guy the EL described as “a dickhead” called me a Nazi while I was giving instructions on the beach, trying to get them to the airfield. I told him to go fuck himself and burst into tears, useless for the next hour to have been hurt so deeply by someone who’s best interests I’d invested a lot of time and energy serving.
The EL refused to see my side of the matter, claiming the incident comprised an unjust outcome and the company sided with him.
They sent me home with a lot of talk about acting in my best interests but it cut me deep to be treated so poorly where Quark always claims to have its guides’ backs.
They expected me back for my second contract but I told them from the moment they announced they were sending me home that I would not contract for them again. No-one who expects their people to accept being treated like dirt gets my time.

Now Quark Expeditions is with-holding my pay.
I worked hard for them in good faith and I got thrown under their corporate bus for my efforts.
Now we can’t pay our rent or bills and the reason being offered, when I can actually get someone to respond to an email, amounts to a lie attempting to throw another ex-Quark team member under the bus.
I did nothing to deserve the extremely hurtful treatment I received aboard the Ocean Adventurer and I did nothing since I got home to warrant a delay in the initially stated payment schedule.

In an epic episode spanning an hour and a half and featuring a singing leopard seal, blowing humpbacks and the tuneless honking of the penguins the residents of Little America and Bolling Advance Base and the various dog and half-track teams reconvene and get out of Dodge aboard the Jacob Ruppert and the Bear.

Episode 091 here for your ears.

The experiments at Bolling Advance Base remain a little known and less spoken of chapter in the history of rave culture.

Byrd gets exactly what he asks for, what he deserves, and then saved, spoiling the symmetry of an otherwise well mapped story of hubris and punishment in the Greek myth mold.

Episode 090 in your feed.
Episode 089 also exists in spite of the lack of a corresponding blog post.

Cue Gilbert O’Sullivan and hope the song reaches back in time and sees Richard Byrd neck himself before he causes any further grief to those his life intersects.

Byrd returns south to finish… something… something brave and stirring and laudably scientific and humanitarian, no doubt. Prolly work it out in payroll. Or in a post-hoc rationalisation that will remain in publication for half a century.

More importantly, I get to share music I love with you.
Egoism’s song “What are we doing” rounds out this episode and I hope you’re inspired to check out their offerings, available at their Bandcamp page. 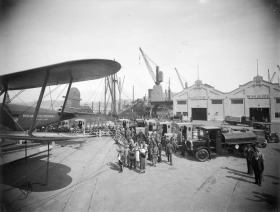 Cows and Condors.
Surge milkers and crap photography from a bygone era.

Iceolation and why it’s not a big deal these days, climate change, a fourteen year old interview with Professor Timothy Naish, and an excuse to use my favourite quote from my favourite robot. 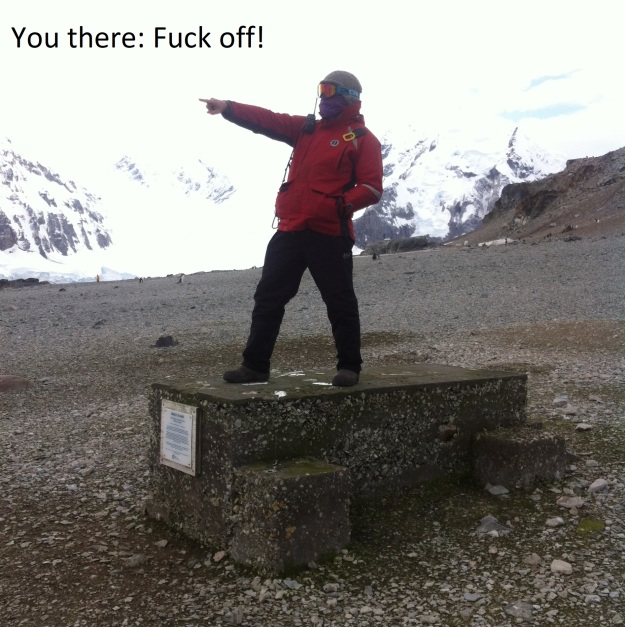 Communications in and out of Antarctica have improved to the point you can argue with people on the internet from the land of ice and snow in near to real time.  Where once it might have taken years to tell someone to fuck off, you can now give precise instructions on which direction and how far they should fuck by satellite link.

Jeff Maynard returns to the dive hut to discuss the non-voyage of the Nautilus and we receive a visitation from the ghost of an Antarctic feline.
Then the sustained influence of James Wordie and the efforts of Gino Watkins get some attention to set the scene for further British efforts in the south.
Oooh, foreshadowing and ghosts. Woooooooooooo!

Simon Lake’s modified Nautilus where it performed at its best: in the dry.

If anyone has access to a copy of “My Antarctic Honeymoon” by Jenny Darlington I would be most grateful for access to that document. It’s not urgent as the events it recounts are some way off in terms of series coverage but it’s turning out to be a difficult book to track down for less than a hundred Australian bucks. I think it offers an important perspective on Antarctica and the US presence thereon, in particular, arising as it does from one of the two women who first wintered there as part of Finn Ronne’s fraught expedition.
Also, the first pregnancy in Antarctica. What’s not to want to know more about?
Ice.
Tension.
Sex.
Conflakes.
It sounds like a book that has it all.

Lars Christensen funds extensive coastal exploration in concert with his whaling exploits. A decade of Norwegian effort gets compressed into a single chagrined episode. 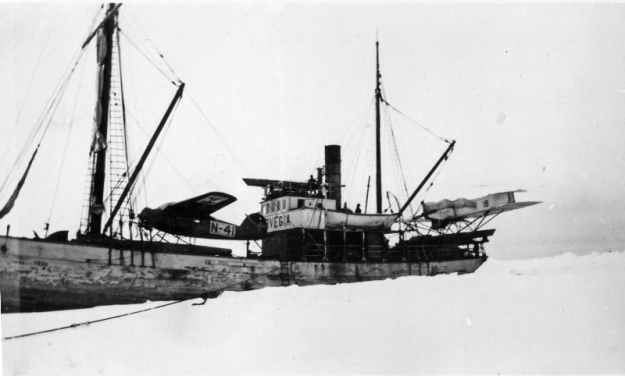 The Norwegia: a tiny ship covered in tiny aircraft heading to a big continent.

What’s better than an episode of “Ice Coffee” about the Antarctic Treaty?
That audio content in your ears without me lifting a finger to generate it.
Get yourself outside this.
Recorded by the ABC and brought to my attention by the Absolute Antarctica facebook page.